With the craft fair coming up and a few other things on the go, my to-do list had become oppressive and the Little Miss kept getting in the way.  Untold tension.  A couple of days ago it became very clear to me that I had mislaid my priorities and I set about setting things straight.

I began by taking the Little Miss on a long walk -- settling for both of us.  On the way home I bought bread.  I bought bread.  I don't do that very often, preferring to do without if I don't have time to bake right away.  It had, however, been days.  Leftovers were slim and Gary -- who relies on bread for the backbone of a lunch -- was making quick work of the crackers I keep on hand for toddler snack emergencies.  Toddler snack emergencies, incidentally, were up.  That loaf of store-bought multigrain eliminated the most oppressive task on my list -- not the hardest or the one that would take the longest, but the one that emanated the most guilt.  It tasted like freedom with jam. 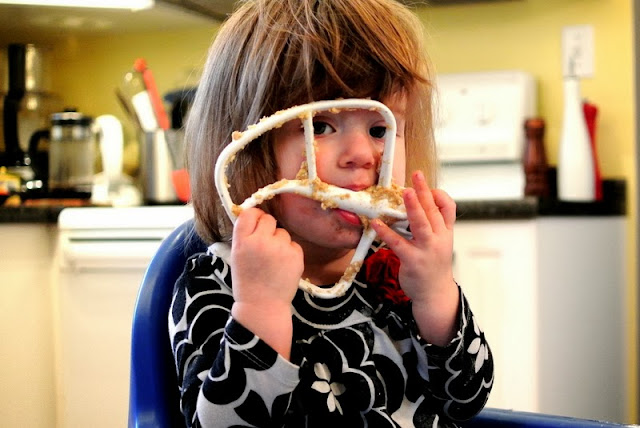 Instead of baking bread, I baked cookies.  With help.  This undertaking -- letting the Little Miss help in the kitchen -- was a first and it was spectacularly successful.  I held her so she could look into the mixer at the butter and sugar.  I passed her the filled measuring cups of flour and oats.  She dumped them into the bowl.  Before I knew it, she was sitting on the counter spooning dry ingredients into the mixer with a spoon and discovering that chocolate chips (previously unknown to her) taste good.  Then I taught her how to lick the beater.

Between the bread and the cookies, I felt like I had gotten something right for once.  That sense of accomplishment has persisted for a couple of days now.  Do you ever feel this way?
Posted by Cristal @ Dapple Design at 21:03